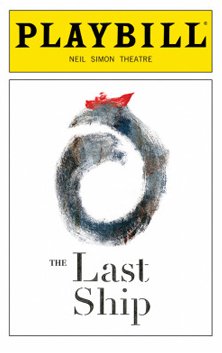 Inspired by Sting’s own childhood, The Last Ship is set in an English seafaring town that operates around the local shipyard and follows Gideon Fletcher, a man who left home to see the world and returns fourteen years later to find that the future of the shipyard is in danger. The shipyard’s workers decide to take their fate into their own hands and build a towering representation of the shared dream that has defined their existence.

How Scott Rudin's Book of Mormon blazed a trail for Hamilton~article from Crain's New York
When banker turned Broadway backer Roger Berlind, producer of Nine and Proof, was invited to a workshop for a frolicking musical satire about hapless American missionaries transported to a…

When banker turned Broadway backer Roger Berlind, producer of Nine and Proof, was invited to a workshop for a frolicking musical satire about hapless American missionaries transported to a war-torn, AIDS-ridden village in modern Uganda, he was instantly, if improbably, won over. Mocking Mormonism, iPhones and American parochialism, the musical was in questionable taste. Nevertheless, “I was hooked in one second,” said Berlind. “I was ready to mortgage my house.”  Read more…

Read More
Sting revisits roots in buoyant, moving 'Last Ship' Article From USA Today
Oct 27, 2014 The lesson of The Last Ship (three and a half out of four), the poignant, exuberant new musical that opened Sunday at the…

The lesson of The Last Ship (three and a half out of four), the poignant, exuberant new musical that opened Sunday at the Neil Simon Theatre, is that you can go home again. And again.

Sting, the show’s composer and lyricist, released an album in 1991, The Soul Cages, inspired by his youth in Wallsend, a shipbuilding town in northeast England, and his complicated relationship with his father, who had recently died. Ship is set in Wallsend, and its protagonist, Gideon Fletcher — not a huge stretch from Sting’s given name, Gordon Sumner — is a prodigal son who, having traveled widely, returns to mourn his dad’s passing.

Three songs from Sting’s catalog, including two from Cages, have been repurposed for the show. Ship‘s British, working-class terrain may seem familiar, too, if you’ve seen The Full Monty, Billy Elliot or Kinky Boots.

But Gideon’s story, which actually bears little resemblance to Sting’s (the character never gets rich or famous, for starters), feels far more original than that of most contemporary musical heroes. Its subjects include different kinds of love, romantic and familial, explored by the pop star and his collaborators, librettists John Logan and Brian Yorkey and director Joe Mantello, with wit and imagination.

When Gideon, played by a robust, likable Michael Esper, searches for Meg, the girl he left behind 15 years ago — to become a sailor, rather than follow his dad into the shipbuilding trade — he finds a single mother, whose son, Tom, happens to be 15. Meg also has a beau, Arthur, a former shipbuilder promoted to a corporate position, who is blazingly decent, and devoted to Tom.

After it’s announced that the shipyard will close down, to make way for cheaper labor, the worldly community priest, Father O’Brien, persuades the workers to defy their former employers and build their own ship. Gideon, disarmed by their pluck and desperate to win Meg back, swallows his ambivalence and joins them. So does Tom, fueling the rivalry between Gideon and Arthur.

There is some hokum along the way, with earthy ladies and gents carousing and clashing in the local pub. But Stephen Hoggett’s choreography also evokes the raw vitality and rough grace of these characters to exhilarating effect. The men leap and soar as an extension of their unmannered virility, not in defiance of it, while the women — particularly Rachel Tucker’s feisty, touching Meg — move with a sensual confidence that can’t be taught in class.

The songs are melodically and emotionally vital, offering potent vehicles for performers such as the wonderful Fred Applegate, cast as Father O’Brien, and Jimmy Nail, who plays a crusty veteran laborer, and whose smoky but siren-like voice evokes Sting’s more nearly than Esper’s.

By the deeply affecting final scene, Gideon, Meg and the others have learned that love, in all of its forms, can involve letting go — of grievances, dreams, even people. That’s hardly a novel concept, but The Last Ship makes it feel surprisingly fresh.

Read More
Sting’s Debut Musical isn’t Perfect, but it Stays Afloat from the New York Post
Oct 26, 2014 You want to love Sting’s “The Last Ship.” It’s a serious-minded show with a new score, not a jukebox of musty hits.…

You want to love Sting’s “The Last Ship.” It’s a serious-minded show with a new score, not a jukebox of musty hits. It even offers an original story, inspired by Sting’s childhood in northeast England.

In other words, this is a grown-up musical the way Sting is a grown-up musician — offering literate, haunting ballads and well-crafted, pop-folky barnburners. It’s also overly earnest and a wee bit grandiose. This duality is reflected in the show’s two overlapping stories. One is very effective, the other not so much.

The closing of the shipyards in Wallsend spurs Gideon (Michael Esper) to return to his hometown after 15 years as a sailor. It’s too late to reconcile with his late, estranged dad, but maybe there’s hope for a life with Meg (Rachel Tucker), the girl he left behind.

Except she’s now living with Arthur (Aaron Lazar), the only guy who had the sense to get a job outside the yards. Together they’re raising Meg’s son, Tom (Collin Kelly-Sordelet) — the offspring Gideon didn’t know he had.

The book by John Logan (“Red”) and Brian Yorkey (“Next to Normal”) weaves those plotlines together fairly well, since life and work are so inextricably tied in Wallsend.

Prodded by the local priest (Fred Applegate), the unemployed men set out to build one last ship on their own.

Yet their efforts are less involving than the story’s love triangle. Meg’s hesitation between Arthur and Gideon seems very real, and Tucker gives her character palpable angst. It also helps that the trio gets great ballads.

The production is handsomely staged by Joe Mantello, while Steven Hoggett (“Once”) contributes his trademark “don’t call it dancing” movement — characters launch into synchronized steps as if in a collective dream.

In many ways, “The Last Ship” is a shaky raft trying to balance too many things, too predictably. But its heart-on- the-sleeve honesty helps keep it afloat.

Read More
Sting's the Last Ship: The Prodigal Son Returns Article from The Huffington Post
Oct 26, 2014 If you’ve attended any of the packed previews of The Last Ship at the Neil Simon Theater, you may have noticed its…

If you’ve attended any of the packed previews of The Last Ship at the Neil Simon Theater, you may have noticed its originator and composer Sting lurking about. At your surprise to see him, he exclaims, “It’s my baby!” Indeed, this musical, with book by John Logan and Brian Yorkey, under Joe Mantello’s direction and with choreography by Steven Hoggett, is an absolute must-see about a young man who leaves home and family to travel the world, only to return after fifteen years to a place altered by modernity, what the British metaphysical poets called mutability. This change is most dramatically felt by a community losing its traditions of shipbuilding, and the work that sustained them literally and spiritually for generations.

The young man, Gideon (younger, Collin Kelly-Sordelet, older Michael Esper), seems in arrested development, a child-man wanting everything as it was. But it is “a different moon,” and he grows up fast. The location is Northern England whence Sting hails, from Newcastle, so close to Hadrian’s Wall, a border to Scotland, a locale that explains the accents, dialect, and syntax, as in one of my favorite songs, “What say you, Meg?” (Meg is Rachel Tucker) which comes when Gideon, still in love with the girl he left behind, wants her to marry him, even though she is now with Arthur (a worthy opponent in Aaron Lazar).

At its core, The Last Ship poses a religious quest for redemption: Father Jim (Fred Applegate) hears Gideon’s confession of sins of the flesh, drink, and foul talk. But hey, this father has a few foibles of his own. His heart is so big, he inspires Gideon and the entire community, characters we come to know and love in the pub, and at the ship yard where industry is closing, turning from the actual building of ships, the mainstay of these hearty, lively folk, to jobs akin to pencil pushing. The company, led by Jimmy Nail as Jackie White and Sally Ann Triplett as his wife Peggy, won’t have it, and they rally to erect just one more ship, the last one, which, as in the epics of old, will carry a body out to sea.

A note here about David Zinn’s scene design, so imaginative, breathtaking and mythic: the ship in all its immense grandeur is an abstract backdrop of sea-worthy glory, a mix of rust and blue-greens. Like all the talent involved in this production, the art is first rate, offering an unforgettable visual denouement.

Sting was an English teacher before he became STING. These epic journeys, quests for identity, paternity, and manhood, must come spilling out of his head. Father Jim is such a rich transformative figure that Fred Applegate who has performed the role from the beginning of Sting’s birthing this project, said he’s quit jobs every time this ship was set to sail. The actor said, if this vessel was heading to Broadway, “I wanted to be the one to play the good Father.”