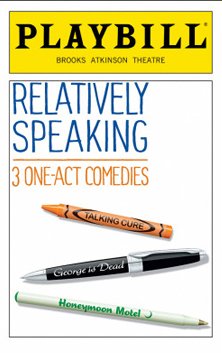 Relatively Speaking, which features one-act comedies by Ethan Coen, Elaine May and Woody Allen, will play its final performance at the Brooks Atkinson Theatre Jan. 29.

The Broadway production comprises three one-act comedies, each springing from different branches of the family tree. Read the Playbill.com feature in which cast members dance around the plot details of the works.

The cast of Talking Cure, in which Ethan Coen “uncovers the sort of insanity that can come only from family,” includes Danny Hoch, Katherine Borowitz, Jason Kravits and Allen Lewis Rickman.

Ethan Coen’s plays include Offices and Almost an Evening. He has made numerous films with his brother Joel, including the Academy Award-winning “No Country for Old Men” and “Fargo,” plus “O Brother, Where Art Thou?,” “Raising Arizona,” “Barton Fink,” “The Hudsucker Proxy,” “The Big Lebowski” and “Burn After Reading.”

Elaine May started her career in The Second City, where she began a successful partnership with Mike Nichols. The two appeared in clubs, on TV and Broadway. May earned a Drama Desk Award for her play Adaptation, a one-act which she directed along with Terrence McNally’s Next. Other plays that she has penned include Death Defying Acts, Taller than a Dwarf, Adult Entertainment, Power Plays and After the Night and the Music. She wrote, directed and starred in her first film, “A New Leaf,” with Walter Matthau. She wrote and directed “Mikey & Nicky,” starring Peter Falk and John Cassavetes. She directed “The Heartbreak Kid” and received an Oscar nomination for the screenplay of “Heaven Can Wait.” Her acting credits in film include “California Suite,” “Enter Laughing,” “In the Spirit” and “Small Time Crooks” (National Film Critics Award). She wrote the screenplays for “The Birdcage” and “Primary Colors” (British Academy of Film and Television Award), which reunited her with Mike Nichols, who directed both films.