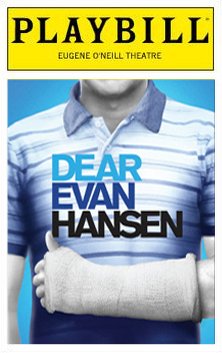 Both deeply personal and profoundly contemporary, DEAR EVAN HANSEN is a new American musical about life and the way we live it.

“A gorgeous new musical for anyone with a beating heart! The marvelous Ben Platt is giving a performance that’s not likely to be bettered on Broadway this season in this gorgeous heart-breaker of a musical. What’s more, the show has grown in emotional potency during its journey to the big leagues. Under the superb direction of the veteran Michael Greif, the show has been subtly refined, its brasher comedy softened, and the performances have grown in delicacy. Rarely – scratch that — never have I heard so many stifled sobs and sniffles in the theater.

For those allergic to synthetic sentiment, rest assured that the show, with a haunting score by Benj Pasek and Justin Paul matched by a book of equal sensitivity by Steven Levenson, doesn’t sledgehammer home its affecting story. On the contrary, the musical finds endless nuances in the relationships among its characters, and makes room for some leavening humor, too. The musical is ideal for families looking for something more complex than the usual sugary diversions. But then it should also appeal to just about anyone who has ever felt, at some point in life, that he or she was trapped ‘on the outside looking in,’ as one lyric has it. Which is just about everybody with a beating heart.”

Dear Evan Hansen’s Colton Ryan Gets Fit~article from Playbill.com
September 23. 2017 The actor, who has stepped in for the demanding title role, walks us through the workout routine that keeps him healthy. Read…

The actor, who has stepped in for the demanding title role, walks us through the workout routine that keeps him healthy. Read more…

Read More
Get a First Look at Ben Platt Guest Starring on Will & Grace~article from Playbill.com
September 29, 2017 Ben Platt, who won a Tony Award earlier this year for his performance in the title role of Dear Evan Hansen, heads…

Ben Platt, who won a Tony Award earlier this year for his performance in the title role of Dear Evan Hansen, heads to the small screen as a guest star on the newly revived Will & Grace.  Read more…

Read More
Get Up Close With the Props of Dear Evan Hansen~article from Playbill.comq
September 22. 2017 A lot goes into putting on a Broadway show, from the performances and sound engineering to stage management and lighting. There’s so…

A lot goes into putting on a Broadway show, from the performances and sound engineering to stage management and lighting. There’s so much happening onstage, that often, theatregoers miss the smaller details—like the props.

We went backstage at the Music Box Theatre for an up-close look at the props used in the Tony-winning Dear Evan Hansen, and spoke to props supervisor for the the show Buist Bickley.  Read more…

Just over a month after winning the 2017 Tony Award for Best Musical, Dear Evan Hansen has recouped its Broadway investment. The production gained its $9.5 million capitalization in eight and a half months.

Produced by Stacey Mindich and directed by Michael Greif, the show opened officially at Broadway’s Music Box Theatre December 4, 2016. The musical features a Tony-winning score by Benj Pasek and Justin Paul and a Tony-winning book by Steven Levenson.

The production has played to Standing Room Only capacity since opening, and by taking in a figure floating around $1.3 million each week, it consistently surpasses its potential gross. Read more…

Get an in-depth look at this past week’s Broadway grosses.

Paula Vogel’s drama Indecent, which is entering the final week of its Broadway extension, enjoyed its second-most lucrative week, bringing in $533,355. The production will shutter August 6. Read more…

La La Land didn’t win the Academy Award for best picture, but it may give Broadway hit Dear Evan Hansen an Oscar bounce.

Dear Evan Hansen sold $1.13 million in tickets during the seven days ending Feb. 26, its best nonholiday week since it began previews in November. The average seat was $141, the third-highest on Broadway, after Hamilton and The Book of Mormon. The show is about a troubled teen caught up in a series of convenient lies that go viral.

The music and lyrics are by Justin Paul and Benj Pasek, who won the Oscar (that wasn’t revoked) for the original song “City of Stars,” which they wrote with La La Land composer Justin Hurwitz. (Pasek and Paul wrote the music and lyrics for Dear Evan Hansen but only lyrics for La La Land.) Although ratings for the Feb. 26 Oscars telecast were down about 4% from a year earlier, an estimated 33 million people watched, a huge audience for a pair of Broadway composers, even if their stage musical wasn’t specifically named.

Elsewhere on Broadway, plays and musicals featuring stars also did well. Sunset Boulevard with Glenn Close had its best week to date, selling $1.33 million in tickets, at an average price of $130. The first full week of Arthur Miller’s The Price, featuring Mark Ruffalo and presented by the Roundabout Theatre Co., was a sellout, grossing $544,000. And the contemporary star–less comedy Significant Other is struggling. It grossed just $228,000, with an average ticket price of $44. It will need a repeat of the great reviews it got off-Broadway when it opens Thursday night.

The Broadway show “Dear Evan Hansen” is being hailed as the next “Hamilton.” Its stars, Ben Platt and Laura Dreyfuss perform “Only Us” live on TODAY.  Click on link below

Ben Platt, the 23-year-old star of the gripping, psychological Dear Evan Hansen, heralds the arrival of a new generation of Broadway talent. He’s been ready for it almost since the day he was born.

Most of us struggle for years trying to figure out what we want to do with our lives, but for Ben Platt that was never a question. “From day one,” the baby-faced actor says, “musical theater was my bread and butter.” When he was sixteen, Platt, who had made his stage debut ten years earlier as the Prince in an all-kids Cinderella, auditioned for the director Michael Greif to star in the touring company of the musical Next to Normal but ended up withdrawing to finish high school. A year later, he tried out for the Off-Broadway musical adaptation of Dogfight, for which he was deemed too young—but not before catching the eye of the show’s young songwriters, Benj Pasek and Justin Paul. Pasek promised that he would be in touch about another project down the line. “I thought, That’s very kind,” says Platt, “but things like that never really come to fruition.” Read more…

Read More
Step into our Opening Night on Broadway | DEAR EVAN HANSEN~video from Youtube.com
Click on the link below to see the opening night on Broadway… https://m.youtube.com/watch?t=17s&v=vunrIXTowZ4

WILL OPEN ON BROADWAY AT THE BELASCO THEATRE
ON SUNDAY, DECEMBER 4, 2016

Ben Platt, who led the world and New York premieres of the musical, will once again star as Evan Hansen, a performance for which he recently won the 2016 Obie Award plus nominations from the Drama League and Outer Critics Circle Awards. Platt will be joined by his Second Stage co-stars Laura Dreyfuss, Rachel Bay Jones, Jennifer Laura Thompson, Mike Faist, Will Roland and Kristolyn Lloyd. Emmy® Award winner Michael Park, who originated the role of Larry Murphy at Arena Stage in Washington D.C., returns for the Broadway production. Casting is by Tara Rubin Casting.

#####
“A superb new musical with great heart and humor. The finest, most emotional resonant score

“Theatrical magic of a special magnitude. An extraordinary work whose captivatingly generous spirit is matched by its exemplary intelligence and fearless embrace of deep feeling.” – Peter Marks, The Washington Post

“Powerfully emotional! A musical gem with the kind of surprising song only found in the best musical theater” – Jesse Green, New York Magazine

“An intimate show with a gigantic heart.” – Jeremy Gerard, Deadline