On a Clear Day You Can See Forever 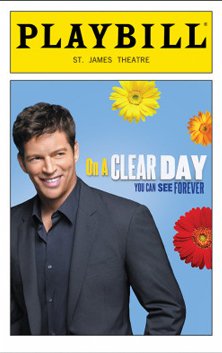 Title:
On a Clear Day You Can See Forever
Role:
Investor

The newly imagined Broadway production of ON A CLEAR DAY YOU CAN SEE FOREVER starring Grammy and Emmy Award winner and Tony Award nominee Harry Connick, Jr. will open on Sunday, December 11, 2011 at The St James Theatre. Previews are set to begin on November 12, 2011. The delightful Tony Award nominated score by Burton Lane (music) and Alan Jay Lerner (lyrics) is enhanced by classics from their film scores for On A Clear Day You Can See Forever (1970) and Royal Wedding (1951). With a new book by Peter Parnell based on the original book by Alan Jay Lerner, the musical is reconceived and directed by Tony Award winner Michael Mayer. The show just launched a brand new website, Facebook page, and Twitter account. Click the links above to check them out!

Originating producer Liza Lerner joins with Tom Hulce and Ira Pittelman and Broadway Across America (John Gore, Thomas B. McGrath, Beth Williams) to bring ON A CLEAR DAY YOU CAN SEE FOREVER to Broadway.

Love blooms in unexpected places in the delightful, newly imagined world of ON A CLEAR DAY YOU CAN SEE FOREVER. Still in love with his deceased wife, Dr. Mark Bruckner (Harry Connick, Jr.), a dashing psychiatrist and professor, unknowingly takes on the case of his life with David Gamble, a quirky young florists’ assistant. While putting David under hypnosis to help him quit smoking so he can move in with his perfect boyfriend Warren, Dr. Bruckner stumbles upon what he believes to be David’s former self – a dazzling and self-possessed 1940’s jazz singer Melinda Wells. Instantly intrigued by Melinda, Dr. Bruckner finds himself swept up in the pursuit of an irresistible (and impossible) love affair with this woman from another time and place, who may or may not have ever existed. Michael Mayer and Peter Parnell’s enchanting new version celebrates much of the beloved score from the 1965 musical including the classic hits “Come Back To Me,” “What Did I Have That I Don’t Have Now?,” “She Isn’t You,” and the titular “On a Clear Day You Can See Forever,” while adding songs from the film score such as “Love With All The Trimmings,” and “Go To Sleep.” Songs from the Lerner and Lane score for the film Royal Wedding such as “Ev’ry Night At Seven,” “You’re All The World To Me,” “Open Your Eyes” and “Too Late Now” complete the landscape for this romantic musical comedy. This production of ON A CLEAR DAY makes the case for living life with your eyes, and heart, wide open.

ON A CLEAR DAY originally opened on Broadway at the Mark Hellinger Theatre on October 17, 1965 and starred Barbara Harris as “Daisy Gamble” and John Cullum as “Dr. Mark Bruckner,” who both received Tony Award Nominations for their performances, as did the score. In 1970 it was adapted into a film directed by Vincente Minnelli, which starred Barbra Streisand as “Daisy Gamble” and Yves Montand as “Dr. Mark Bruckner.” In addition to writing ON A CLEAR DAY with Burton Lane, lyricist/librettist Alan Jay Lerner and Lane wrote the movie musical, Royal Wedding and the musical Carmelina. With his frequent collaborator Frederick Loewe, he created some of the world’s most popular and enduring works of musical theatre for both the stage and on film, including Brigadoon, Paint Your Wagon, My Fair Lady, Camelot, and Gigi. Lerner also wrote the libretto for An American In Paris, the first musical film to win an Academy Award. He won three Tony Awards and three Academy Awards, among other honors.

Composer Burton Lane is best known for his score for the musical Finian’s Rainbow. In addition to ON A CLEAR DAY with Lerner, they also collaborated on the Broadway score for Carmelina and the film Royal Wedding. His other Broadway scores include Hold on to Your Hats, Three’s a Crowd, Earl Carroll’s Vanities and Laffing Room Only. During his career, Lane composed songs for over 45 films.

Peter Parnell’s plays include QED, which starred Alan Alda both at the Mark Taper Forum and on Broadway at the Vivian Beaumont Theatre (Lincoln Center Theater Company). His two-part stage adaptation of John Irving’s The Cider House Rules won the American Theatre Critics Association Award. His other plays have been produced by the Atlantic, The Public Theater, and Playwrights Horizons. For television, Parnell was a co-producer for The West Wing (two EMMY citations), and a producer for The Guardian, Inconceivable, and Six Degrees. Parnell serves as Vice President of the Dramatists Guild.