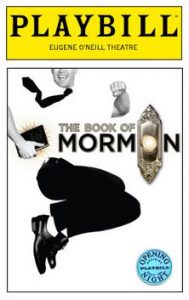 The Book of Mormon follows two young missionaries who are sent to Uganda to try to convert citizens to the Mormon religion. One missionary, Elder Price, is an enthusiastic go-getter with a strong dedication to his faith, while his partner, Elder Cunningham, is a socially awkward but well meaning nerd whose tendency to embroider the truth soon lands him in trouble. Upon their arrival in Africa, Elders Price and Cunningham learn that in a society plagued by AIDS, poverty and violence, a successful mission may not be as easy as they expected.

Composed by South Park creators Trey Parker and Matt Stone and Avenue Q's Robert Lopez, The Book of Mormon is an old-style musical with a modern sensibility. This blockbuster show features several big song-and-dance numbers accompanied by some old-fashioned Broadway belting. An equal opportunity offender, the show playfully pokes fun at religion, sexuality, poverty and race, while inspiring an after-the-show discussion of religion in general.