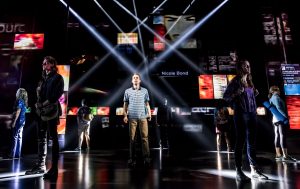 La La Land didn't win the Academy Award for best picture, but it may give Broadway hit Dear Evan Hansen an Oscar bounce. Dear Evan Hansen sold $1.13 million in tickets during the seven days ending Feb. 26, its best nonholiday week since it began previews in November. The average seat was $141, the third-highest on Broadway, after Hamilton and The Book of Mormon. The show is about a troubled teen caught up in a series of convenient lies that go viral. The music and lyrics are by Justin Paul and Benj Pasek, who won the Oscar (that wasn't revoked) for the original song "City of Stars," which they wrote with La La Land composer Justin Hurwitz. (Pasek and Paul wrote the music and lyrics for Dear Evan Hansen but only lyrics for La La Land.) Although ratings for the Feb. 26 Oscars telecast were down about 4% from a year earlier, an estimated 33 million people watched, a huge audience for a pair of Broadway composers, even if their stage musical wasn't specifically named. "That they won the Oscar will help build the Evan Hansen momentum," said Scott Mallalieu, president of greatwhiteway.com, a group-sales service. Mallalieu said Faye Dunaway's mistakenly announcing La La Land as best picture probably won't affect Dear Evan Hansen one way or another. Elsewhere on Broadway, plays and musicals featuring stars also did well. Sunset Boulevard with Glenn Close had its best week to date, selling $1.33 million in tickets, at an average price of $130. The first full week of Arthur Miller's The Price, featuring Mark Ruffalo and presented by the Roundabout Theatre Co., was a sellout, grossing $544,000. And the contemporary star–less comedy Significant Other is struggling. It grossed just $228,000, with an average ticket price of $44. It will need a repeat of the great reviews it got off-Broadway when it opens Thursday night.