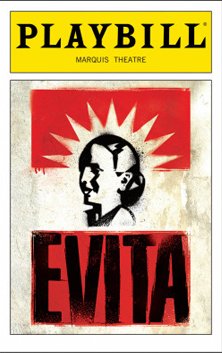 Andrew Lloyd Webber and Tim Rice’ s Evita charts the rags-to-riches rise of the First Lady of Argentina, who won the love of her countrymen after marrying military leader-turned-president Juan Peron. Set in Buenos Aires between 1934-1952, the musical follows Eva Duarte Peron on her journey from fatherless child to ambitious actress to the most powerful woman in Latin America and, eventually, to a saint-like figure after her death from cancer at age 33. The events in Evita’ s life are presented in song and editorialized on by the show’ s narrator, Che.

This first Broadway revival of the popular 1979 musical has been given a lavish production by Tony-winning director Michael Grandage. The score includes hummable tunes like ” Don’ t Cry for Me, Argentina” (sung by a gorgeously gowned Evita in the now-famous balcony scene) and adds ” You Must Love Me,” the Oscar-winning ballad sung by Madonna in the movie. Evita is a sweeping evening of Broadway entertainment, boasting a 25-member ensemble and captivating choreography by Rob Ashford