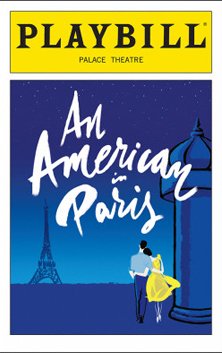 An American in Paris is the romantic story of a young American soldier, a beautiful French girl and an indomitable European city, each yearning for a new beginning in the aftermath of war. Starring Robert Fairchild (NYC Ballet) and Leanne Cope.

Synopsis:
An American World War II vet turned painter settles in Paris and promptly falls in love. The new musical is inspired by the Academy Award-winning film and includes the Gershwin songs “I Got Rhythm,” “Liza,” “’S Wonderful,” “But Not for Me,” “Stairway to Paradise” and orchestral music including “Concerto in F,” “2nd Prelude,” “2nd Rhapsody,” “The Cuban Overture” and “An American In Paris.”